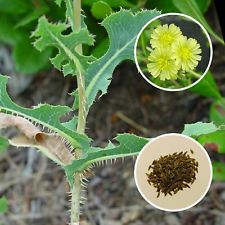 The seed oil is used for “hardening of the arteries” (atherosclerosis) and as a substitute for wheat germ oil.

Some people apply wild lettuce latex directly to the skin to kill germs.

Wild Lettuce is also known as Opium Lettuce, wild opium, horse thistle, China lettuce, and prickly lettuce.  In some areas of the country people may call it “milkweed” due to the “milk” exuded when the stem is broken or damaged.

The reason it’s referred to as opium lettuce, is due to the pain relieving and sedative effects that it has been known to produce through a white substance found in the stem and leaves called lactucarium. It has no opiates but has similar effects when used, acting directly on the central nervous system to lessen the feeling of pain, just like morphine.

Englarged prostate (benign prostatic hyperplasia, BPH): Don’t use wild lettuce if you have this condition. It contains a chemical that can harm people who have trouble urinating.

Allergy to ragweed and related plants: Wild lettuce may cause an allergic reaction in people who are sensitive to the Asteraceae/Compositae family. Members of this family include ragweed, chrysanthemums, marigolds, daisies, and many others. If you have allergies, be sure to check with your healthcare provider before taking wild lettuce.

Narrow-angle glaucoma: Don’t use wild lettuce if you have this eye condition. It contains a chemical that might make glaucoma worse.

Surgery: Wild lettuce can affect the central nervous system. There is a concern that it might cause too much sleepiness if it is taken along with anesthesia and other nerve-numbing medications used during and after surgery. Stop using wild lettuce at least 2 weeks before a scheduled surgery.

Wild lettuce seems safe for most people in small amounts. Large amounts, however, can slow breathing and might cause death.

Back in the 19th century, wild lettuce was already being used by some as a substitute for opium. But, it was in the 70’s that it started to gain significant popularity by those wanting a more natural remedy. Individuals were starting to use it for both pain relief, as well as recreational purpose.

In the earlier days, people using wild lettuce prepared it a couple different ways. One way was to cook the plant in a pan of water and sugar mix, until it reduced to a thick syrup-like consistency. While this was an effective form, it was quite bitter even with the sugar added. The most common form, however, was drying the stem and leaves to use as an herbal tea.

The tea remains popular today. BUt it’s also being dried for smoking, or vaporizing.

Historically, the Hopi smoked the dried resin that they obtained when the flower was cut off of this plant. This resin would then be air-dried and later smoked in ritual. Similar effects could be obtained from smoking dried Wild Lettuce leaves, but never as potent as the resin extracted daily from the flowers. Furthermore, the Hopi believe that induced dream states contain more information about reality than the conscious waking state. Wild lettuce was not only used in ritual to help achieve visionary and trance states, it was used to enhance the vividness of dreams when smoked prior to sleep.

A typical Wild Lettuce recipe is simply this:

Lactucarine, the active alkaloid in the plant, extracts well enough into water. So, natives would gently simmer 1 ounce of Wild Lettuce dried leaf per person over a period of 8 hours, stirring often. As the water evaporated, a gummy residue would be left behind. This resin would be carefully removed from the cooking vessel, and then sealed in a container to prevent it from drying out. One ounce of material typically produces about 1/2 of a gram of resin, and the 1/2 gram of resin was smoked in one sitting during rituals. Please note that smoking is dangerous to one’s health, even when it’s a natural herbal product.

The Holistic Herbal suggests pouring one cup of boiling water over 1-2 teaspoons of the dried leaves of wild lettuce and allowing them to infuse for 10-15 minutes. This infusion can then be consumed up to three times daily.

Here are the more popular reasons people are gravitating towards this natural pain killer and medicinal plant:

Migraines – People who use it for this purpose claim that they experience fewer migraines than they did prior to starting the herb.

Insomnia – A frequent use of wild lettuce is by people who have trouble sleeping. It produces a relaxed and euphoric feeling, helping a person fall asleep easier, without the addictive qualities of commonly prescribed sleeping aids.

Anxiety – Wild lettuce can act as a mild sedative, allowing people with anxiety to find a reprieve from the stress it causes.

Asthma and Cough – Wild lettuce has antitussive properties, which alleviates or suppresses a cough. Also, asthmatic patients who have used opiates notice more episodes if they go through opiate withdrawal. So, the use of wild lettuce instead of prescription opiates, could be a better option for them.

In addition to the above benefits, wild lettuce produces a euphoric sate, similar to opiates, even though it does not contain any actual opiate…so it’s perfectly legal.